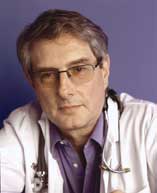 Writing from a frame of reference of 20 years in the ER, Peter Clement has written eight books that bring readers inside the world of emergency medicine. With fast-paced action and true-to-life dialogue Clement gives a riveting view of science and medical practice in novels of stunning suspense.

From the best selling Earl Garnet series -- Lethal Practice, Death Rounds, The Procedure, Mortal Remains, and The Inquisitor -- through the Richard Steele books -- Mutant, an examination of genetic manipulation as a bioterror weapon, and its sequel, Critical Condition, a foray into the amazing universe of stem cell research -- his stories soar above and beyond any cautionary classification.

Clement's eighth book, The Darkness Drops, extraordinarily prescient and hailed as his most ambitious novel to date, introduces Dr. Terry Ryder, Chief Advisor to the White House for Bioterror Preparedness. In chronicling Terry Ryder's heartbreaking journey through the unintended yet devastating consequences of scientific hubris, arrogance and naivety, Clement has written a taut, richly-plotted thriller that is, above all, a love story.

His latest work is Therapy, a short story. In this edgy tale of dark courage, murder and redemption told from a most unique perspective, the damage is deep and the crime unpardonable.

Welcome to the world of Peter Clement.

"With “Therapy,” Clement does more in under 30 pages than many authors do with 300-page novels."--The Book Reporter--New York